Homeowners in California are accustomed to frequent power outages that cause blackouts. What’s more irritating is the fact that blackouts tend to remain for a few hours to up to several days. Therefore, homeowners are now looking for portable generators so that they can keep the important appliances running.

When it comes to unexpected power outages, people have two options: a backup generator or solar battery storage. However, these days, people are no longer looking for traditional ways. And, there’s a good argument that favors adding up a battery backup power in your home. Let’s break down the differences so that you can make the right decision.

The need for an alternative power source:

The main cause of buying a backup power source for your home in almost every part of California is quite understandable. According to the concerned authorities in California, public safety and wildfire aren’t likely to perish in the next decade. Hence, power outages tend to be a natural phenomenon in this area.

Because of these reasons, the state can encounter power outages for a prolonged time. As such, plenty of electricity consumers both at businesses and homes are going to suffer. In the Southernmost part of the State, the frequent arrival of hurricane style winds has led to more severe consequences about power outages.

Even the Northernmost part of California isn’t spared. The people in the area experience frequent blackouts during the winter months. Strong winds along with ice storms make the trees to trip over. That way, the trees take down the power lines along with them. All these outcomes compel people to have a backup power solution at their homes or businesses.

Hence, a backup generator or solar battery storage can keep the electrical appliances up and running during the blackouts. The traditional way of drawing power from portable generators seem to be absurd in recent years. However, solo solar panels can’t provide you the necessary power during the outage. 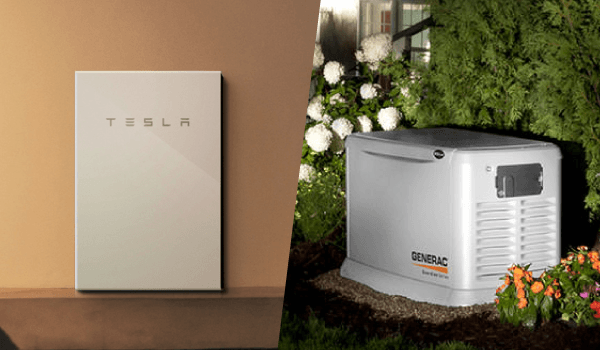 As aforementioned, people in California are more accustomed to buying a backup generator for their specific needs. However, things are changing for good. Homeowners tend to opt for a backup generator power source because of two reasons. First, the upfront cost of installing backup generators is pretty much less compared to the other sources for providing backup power.

Second, generators are available without problems and they are quite easy to set up as well. In the past, it was an easy affair to get the generator and install it at your home. What’s more interesting is that people can find these kinds of power sources at nearby home improvement stores. Some generator models don’t even need an expert to install.

Despite many advantages, backup generators have many flaws. The first and the most important one of all is that you need to make sure fossil fuels are easy to access. It means fuel should be available during a prolonged electric outage. However, it is seen that arrangement of fuel during this critical period is hard sometimes.

That’s because people aren’t prepared for an outage all the time. Next comes the most important part that people expect, which is noise and compatibility. There is no question that backup generators are big. Also, they make loud, harsh noise while operating. Because of the noise, people find it hard to run the device every day.

Now, that means you get benefits from these generators only when there is a major blackout in the area. Finally, the burning of fossil fuels on these generators causes air pollution. Batteries used for energy storage, on the other hand, cost you more upfront. Also, they need a qualified technician to install the same.

Apart from these things, batteries solve all the aforementioned issues that are found in traditional backup generators. There are benefits of using battery backup power. First, when batteries are connected with solar panels, they retain the energy. The sun powers the solar panels and the battery refills every day as long as the sun is shining bright.

Second, batteries operate without any kind of noise, unlike the backup generators. That way, it favors the people. Finally, there is no emission relating to the utilization of solar battery storage. They operate on a renewable and clean power source, the sun.

Evaluating all the things, it is quite clear that solar battery storage might be the best choice for both your home and office. If you are thinking about making the right decision after comparing both these power sources, energy storage is the best option.

Backup generators are indeed quite inexpensive and they can fulfill your power needs. But the benefits of installing battery storage power outweighs them. When you pair them with solar panels, you can save a lot of money on your utility bills.

On top of that, battery storage is easy to clean and provides quiet power. Now, these are some of the features you can’t expect from an ordinary backup generator. If you are living in California, you are aware of the benefits of getting backup power installed in your living space.

Generators have been a popular choice for homeowners for a prolonged time. However, there has been a rise in the population of people who are adopting cleaner, newer battery storage options like Tesla Powerwall or LG Chem RESU. Battery backup provides similar backup power to the conventional generators. But, they don’t need fuel to run.

All they need is solar panels that capture the sunlight. Battery storage is a cost-effective and eco-friendly method that you can’t derive from a traditional generator to draw power. While upfront costs of batteries might be higher, lifelong savings outweighs the upfront payment incurred.

Still, wondering about what might be the better option for your backup power? Don’t fret, Semper Solaris can answer your questions. We are a *Tesla Powerwall Certified Installer*. Get an elaborate idea about what solar battery storage is and what they can provide you with. Choose the right solution for your backup power with the best battery storage solutions in California. Now, you can keep the lights on during a power outage.

Keep the Power Running With Solar Panels and the Tesla Powerwall